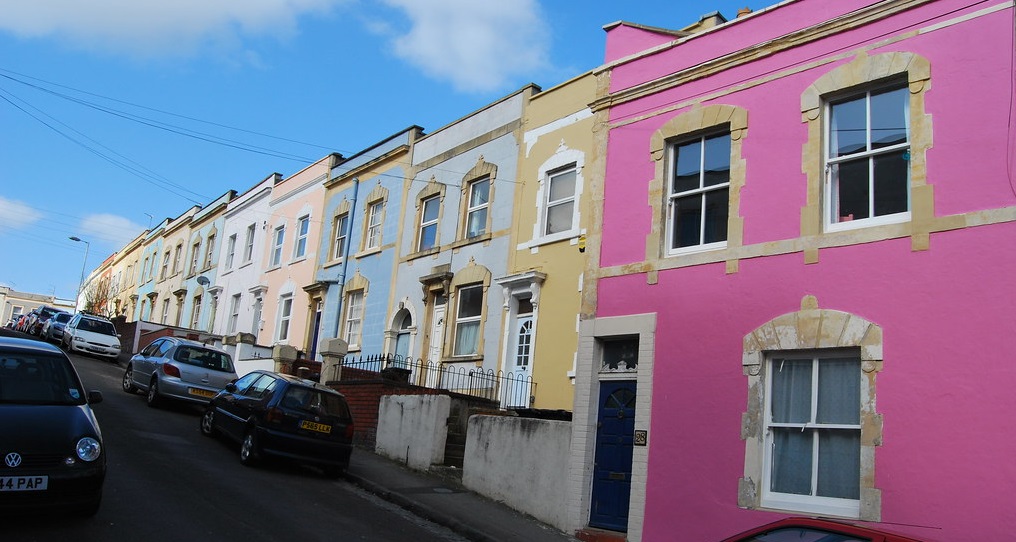 Totterdown is probably best known for its terraces of colourful houses, which can be seen from all over the city of Bristol. This is an area of steep streets, independent businesses and local art, and it is a popular place for families to live. Totterdown is in Windmill Hill ward, and the majority of its properties are flats and terraced houses, many of which have three or more bedrooms. If you’re looking to buy here, the average asking price is £327,500 for a 2-bed house, or £159,000 for a 1-bed flat. Renters can expect to pay anywhere from £875 to £1,200 per month to live here.

Totterdown’s rows of terraced houses were built to house railway workers for nearby Temple Meads Station, but in the 1970s many of the original Victorian houses were knocked down, and thousands tenants evicted, to make way for a road that was never built. This had a huge impact on the community, which is still felt by many people today, but eventually the plans for the road were scrapped, homes were rebuilt and the community came back in a new form as the Totterdown we know today.

Totterdown is very close to Temple Meads train station, and only a short walk from the centre of Bristol, and there are also plenty of bus routes that run along Bath Road and Wells Road. Totterdown does have some problems with traffic congestion, and its steep streets can make parts of it difficult to navigate on foot, but in general it is a relatively central area that is well connected to the heart of the city.

There are plenty of local facilities in Totterdown that make it a comfortable place to live, including schools, shops, churches and a mosque. In terms of green space, there is Perrett’s Park and the expansive Victoria Park, which contains play areas, tennis courts and a bowling green. Some fitness clubs are also run here, and there is a nearly 2 km route around the park for walkers and joggers. Of course, given its hilltop position, Totterdown commands excellent views over Bristol, including the Clifton Suspension Bridge.

Totterdown is known for its vibrant arts and music scene. Many of the local pubs put on live music and open mic events, and in November the Totterdown Art Trail gives you the chance to enter artists’ studios and talk to the artists about their work. This area is also well-known for its food and drink, and there are plenty of restaurants to try here, including vegan cafe Eat Your Greens and local chippy Farrow’s.

If you’re interested in living in Bristol, or you have a property to rent in the city, Gough Quarters can help you. Contact us today to find out more.